Exploring the narrow medieval streets of Granada, you are sure to come across colourful and bustling markets selling a myriad of products.  Granada’s warm weather and its hidden squares and ancient terraces all lend themselves to open markets with clusters of stalls selling anything from fresh fruit and vegetables, fish and meat, to artisanal gifts and souvenirs.  Take a little time to browse and barter with the locals, or find a nearby café and take in the atmosphere!

Check out our recommendations below . . .

The San Augustin Market or Mercado de San Agustin Granada is an indoor Granada market with a great vibe.  It has a number of undercover stalls selling predominantly locally sourced fresh meat and fish, but you will find other stalls selling fruit and vegetables, wine and olive oil alongside a number of places serving tasty traditional dishes.  The market is located next to Granada Cathedral and is perfect for a spot of lunch after a busy morning as there are plenty of places where you can sit and relax, enjoy a drink and eat the food from the stalls.  In the summer there is additional outdoor space where you can eat.  We recommend visiting before 2.30pm as some of the stalls start to close around then.

The Silk /Spice Market Granada or the Alcaiceria 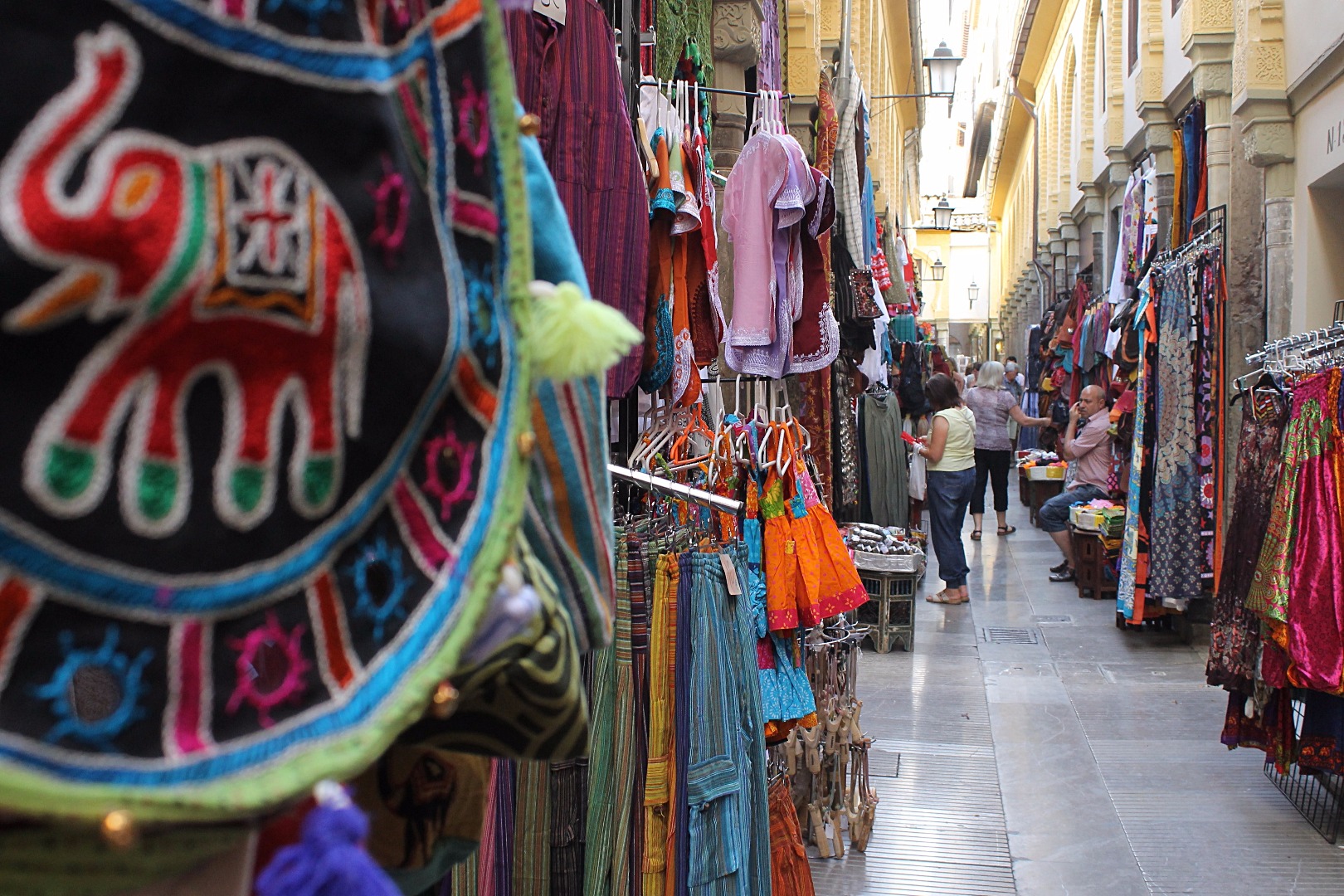 Once known as ‘The Grand Bazaar’, the Alcaiceria is now a popular and colourful tourist market located in a maze of narrow streets between Granada Cathedral and the Plaza de Bib-Rambla.  The original Moorish Spice Market was sadly destroyed by fire and had to be rebuilt.  Today the Alcaiceria is still a great experience and a place where you can find all the usual tourist gifts such as porcelain, clothes and jewellery alongside some stalls still selling herbs, spices, Arabic silks and fabrics.  Feel free to bargain!

Best for: Mostly souvenirs and some silk and spices

The Plaza Larga, which translates as the ‘Long Square’ is a rectangular square, right in the heart of the Albaicín.  The square itself is delightful and worth visiting even when the market isn’t on as it has a lovely mixture of small bars, cafes and shops selling ceramics which are attractively displayed on the walls.  Every Saturday morning the square is taken over by a bustling cluster of stalls selling fresh fruit and vegetables, the perfect time to stop off for some refreshment and to watch the world go by!

Best for: Fruit and vegetables

La Marcha Verde, or the ‘Green March’ is a large busy open air market, held every Sunday (9am to 3pm) in the northern suburb, Almanjáyar of Granada.  Traditionally the poorest area of Granada, this northern zone is seeing some regeneration and the market is away from some of the rougher areas, but we do still advise to keep your valuables safe.    Once there you will find a noisy and colourful atmosphere with a mix of locals and tourists.  Great for a bargain!

A true local market in Zaidín, a southern district of Granada.  The market is great for experiencing a bit of local flavour and the journey from central Granada is also of interest with some attractions on the way.  To get to the market there is a 45 minute walk which takes you down the Acerca del Darro, the Calle de Andrés Segovia and the Paseo del Emperador Carlos V . The walk takes you past the Plaza del Humilladero with its iconic bronze fountain called Fuente de las Granadas which is worth a stop for a photograph.  Cross over the confluence of the rivers Darro and Genil over the picturesque Puente Genil, which is also known as the Puente Romano or Roman Bridge.  If you don’t fancy the walk you can take the LAC bus as far as the Humilladero stop (a five minute journey) where you can view the statue and cross the bridge.  Next take the S3 bus from the Poeta Manuel de Gongora 1 to the Emperador Carlos V 1 –Palacio Deportes (a ten minute journey).

This popular market with locals is held every Wednesday morning in the North West district of La Chana.  It is a chaotic scene with vendors selling everything from flowers, fruit and vegetables to cheap clothes.

Best for: Clothes, flowers and fruit.

On the first Saturday of each month, on the terrace in front of the Palacio de Congresso you will find the EcoMercado or organic / farmers market.  This Granada market specialises stalls offering organic, slow grown and environmentally friendly products.  On the third Saturday of each month you will find the Ecomercado en Huétor Vega which is hosted by the same organisation.  It has a similar theme but features organic food and products all supplied by small local producers from Huétor Vega which is a municipality on the outskirts of Granada.  Each month the Ecomercado en Huétor Vega has a special theme, for example, products for children, recycling, bread making etcetera.

Location: On the Terrace or Esplanada at the Palacio de Congresso

The Mercado del Agua which translates literally as ‘water market’ is up on the Mirador de San Nicolas and gets its name from the old Moorish brick water cistern called El Pilar del Aljibe which was part of a network of water courses which once supplied the city.  Every other month the Mercado del Agua takes over this pretty terrace alongside El Pilar del Aljibe with stalls selling 100% hand made goods.  The aim of the Mercado del Agua is to preserve the traditional arts and crafts that characterise the city of Granada and to promote an exchange of knowledge, skill and creativity between the artists themselves. The Mirador de San Nicolas isworth the visit even if the market isn’t on, just for the fantastic view over the Alhambra.

Best for:  100% Handmade crafts and jewellery

Made in Granada is a market focusing on handicrafts and artistic design from the Granada area and is a great place to pick up original artworks and other handmade crafty products.  This Granada market is a weather dependent event but aims to be held on the third Sunday of each month.  The location is the wide and tree lined Campo del Príncipe where you will find a large and impressive statue of Cristo de los Favores (Christ of the Favors).  Made in Granada is run by Creando, a non-profit association whose ethos is originality, quality and design.  It is worth checking their Facebook page for the date of the next market and to see if weather is going to play a part!

Granada Pinta Bien translates literally as ‘Granada Paints Well’ and is a government initiative to promote local emerging artists.  It is held each month at either the Plaza de la Romanilla or at the Paseo de los Tristes.  Both venues are worth a visit even when the market isn’t being held.

The Plaza de la Romanilla is a lovely square with bars and cafes in the Cathedral quarter and is known for its palm trees the poignant statue of the ‘Watercarrier’.  The Paseo de los Tristes translates as ‘The Passage of the Sad’ named after the funeral processions that used to pass by.  Today it is a beautiful place to walk along with trees providing shade and street cafes to stop off at.  There is a wide pedestrian walkway with a terrace area overlooking the Darro River that offers fantastic views of the Alhambra.

Each month the Granada Pinta Bien takes over one of these locations and you will find a range of artistic products on sale from clothes and accessories to art and items made out of recycled materials.  Please check their Facebook page for the date of the next Granada Pinta Bien.

In 2014 Granada was officially granted the status of a UNESCO City of Literature.  Granada has long held literature in great esteem and for many years the city has hosted an annual book fair which is traditionally held over the third week of April each year.  At this time the wide tree lined avenue of the Carrera is taken over with hundreds of books stalls and publishers and many of the local buildings host book related events.  You will find authors signing books, readings and much more.  The Feria del Libro, Granada is a must for anyone with an interest in literature.

Best for: Books and Publishers

Location: The Feria del Libro, Granada is spread over a number of venues and stalls can be found from la Fuente de las Batallas (the Fountain) and down the Carrera de la Virgen

If you are lucky enough to visit Granada in the run up to Christmas then head to the Plaza de Bib- Rambla around the corner from Granada Cathedral.  Here you will find pretty Christmas lights and Granada’s Christmas market with stalls offering a range of local and seasonal merchandise such as nativity scenes, Christmas decorations, wooden toys and candles.  If you find yourself hungry you can pick up cakes and biscuits made by local nuns, or hot churros from local vendors.

If you are planning to visit Granada and you are looking for somewhere to stay, then we recommend El Ladron de Agua located at the foot of the Alhambra in the heart of the Albaicin.  Within easy reach of most of the bustling markets of Granada and many tourist spots El Ladron de Agua is the perfect place to stay.  This 16th century noble house has been skilfully restored to a boutique hotel with 15 individually styled rooms.  There is also a cosy library, the perfect place to enjoy a glass of wine and meet other guests.  As an arts hotels, El Ladron de Agua invites talented local or regional artists to feature their work in exhibitions in the gallery in the inner courtyard of the hotel.

See you in Granada!